The Story of Mimi and the Mimi Photos!

Look who came to visit- the baby in the photo!

Did you know that Mimi was a real person? The large photos displayed around Mimi’s Attic are all prints of original photos of Mimi in various stages of her life. Over Thanksgiving weekend, Mimi’s daughter, Jeanne Ditzler, came to visit and we snapped this photo of four generations of Mimi: Mimi herself, the baby in the photo (Jeanne), Kelly Moreland (the Owner of Mimi’s Attic) and Geneva Moreland (Mimi’s great grandaughter)!

The photo we like to call “Breakfast with Mimi”!

A couple of interesting facts about the photos – most of the photos where taken by Mimi’s husband (Charles L. Hinkel) who enjoyed photography as a hobby. You’ll notice that a couple of the photos were taken with a tripod and an auto-timer and include Charles in the photo.

Ahh… domestic bliss around the fire.

When owner, Kelly Moreland, decided to use these family photos as decor in Mimi’s Attic she needed to do it in a budget-friendly way, so she conferred with creative-thinkers Matteo (@mouselink on Twitter and Instagram) and Phoebe Wyllyamaz. The couple came up with a great plan that meant not having to make large color copy signs. Instead, they suggested that she make black and white copies on regular paper and then rub the paper with coffee grounds to give them the same sepia-tones as the original photos. The paper images where then mounted to plywood with wallpaper paste. We think this approach worked fabulously and the signs have held up well since 2010!

The serendipitous  “four generations of Mimi” photo taken at Thanksgiving was really fun for us to see and share. It also reminded us that some of you may enjoy reading more about Mimi, so we are re-posting her story below.

Mimi was the grandmother of Kelly Moreland, the owner of Mimi’s Attic. Mimi’s real name was Ethel Hinkel, but all of her grandchildren called her “Mimi”. She made her first home as an adult in a small, newlywed apartment in Brooklyn in which she took great pride. She later moved with her five children to a farm house while her husband served in World War II and then finally settled into her long-time home in the downtown of Danville, Pennsylvania. Widowed at a young age, Mimi spent most of her adult life as a single parent, a full-time school teacher of French and English, and matriarch to many.

Mimi’s silver pitcher that Kelly uses in her home today!

Everything in Mimi’s house was pretty, especially from the eyes of a little girl: copper roosters on the walls of the kitchen, well-stocked vanities in the bedrooms, matching bedspreads, pewter figurines, cast iron doorstops, roll-top desks and happy plants in every room.  Probably most impressive to Kelly in her youth was the large, mahogany dining room table with lion’s feet.  At this table Mimi hosted many dinners. They began with a leisurely “cocktail hour” and ended with blueberries and milk or sherbet and chocolate syrup.  The children were in charge of filling the silver pitcher with ice water and “crumbing” the linen tablecloth after dinner.

Mimi loved yard sales, thrift stores and flea markets – and she passed down this passion to her children and grandchildren. Some of her favorite things to seek out were antique tools and silver. She appreciated quality and style, and, like so many of us, enjoyed plucking out items of distinction. This is why we think Mimi would have loved shopping and trading at her namesake – Mimi’s Attic.

Posted in Uncategorized | Comments Off on The Story of Mimi and the Mimi Photos!

Before and After: Upcycled Ottomans

These ottomans went from boring and blah to fun and fabulous! Long-time consignor, Anne, has a great eye for picking fabrics that look fresh and cheerful. I could keep raving, but I think the pictures say it all.

Get inspired to upcycle your own pieces or stop in and pick up a piece that Anne has already done for you!

Need some great fabric to get the job done? Check out Sew Green in Ithaca for affordable options. Their stuff is all recycled and secondhand – good for your wallet AND good for Mother Earth.

Posted in Uncategorized | Comments Off on Before and After: Upcycled Ottomans

Our fourth annual West End Weekend was a huge success! 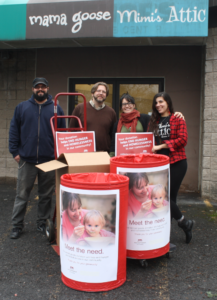 Can’t wait to do it again next year!

Posted in Uncategorized | Comments Off on Ithaca is Giving!